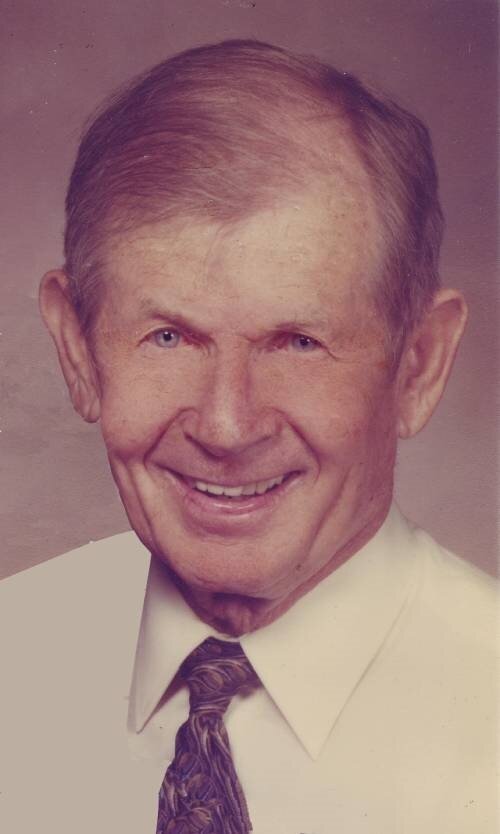 William 'Bill' Sanderson died May 8th at the age of 97 of natural causes.He is survived by a brother and a sister living in Virginia, his three sons, and several grandchildren and great grandchildren. As the youngest of those three sons, I asked to be the one to offer this tribute to his life – yes, through my filial lens -- but also with perspective informed by impressions from others who knew him well. He was preceded in death (by about three years) by the one who knew him best, his wife of 70 years and acutely-missed friend, Dorothy ‘Dot’ Sanderson. When recapping the highlights of Bill's life, his affection for, loyalty to, and admiration of Dot must top any list. "They were a team" is a phrase that rolls off people's tongues seemingly reflexively, and her loss prior to the pandemic paired with the one-two punch of crushing isolation during its height could be viewed as both his most intractable, and final challenge.

Bill ("W.P." to family 'back East') Sanderson was born in the farming community of Cumberland County, Virginia in August 1924, the oldest of five children. Calvin Coolige was a year into his presidency, Arizona (Bill's home since 1964) had added the 48th star to the U.S. flag only 12 years before, and Charles Lindbergh had yet to cross the Atlantic three years hence. Bill entered the world into an unelectrified, agrarian existence in many ways little changed from ages past, and he left it just shy of a century later having straddled a span of change unimaginable. On that shifting backdrop, my father embodied some traits as timeless as they are honorable: He was scrupulously ethical, anonymously generous, and to me unfailingly kind. His brother John wrote to comment that he "couldn't have invented a better brother." I personally witnessed the kindness of his father, see it in abundance in his grandchildren, and contend that however that trait was conveyed across generations, it may be his most impressive legacy.

Bill was the first in his family to attend college, Randolph-Macon in Ashland, Virginia, and he was fond of telling the story of how his father sold a truckload of chickens to come up with tuition money during the drive taking him to college, his initial fees being conspicuously paid only in coin. At age 19, he joined the U.S. Navy, soon after serving as an ensign aboard the attack transport USS Jerauld in the Pacific campaign. (Attack transports were designed to go into combat with troops and equipment to be disembarked ready to fight.) At war's end, Bill told of his ship remaining outside Nagoya harbor for a week or more awaiting mine-clearing before being able to dock. An ad hoc headquarters onshore was established at a geisha house, where he and the other officers were received with unexpected graciousness and civility.

After the war, Bill married Dorothy Sanderson (née Meixner) of Long Beach, California, having met her while both attended U.C. Berkeley. Bill began a 23-year employment with General Electric soon thereafter, and theirs became a quasi-nomadic life of frequent moves to different parts of the country consistent with a middle management career training trajectory of that era. The move to Phoenix in 1964 was expected to last 'the usual' 18 months. Instead it spanned 58 years. In the early '70s Bill left G.E. to launch his own company, Western Computer Leasing, which roughly speaking was a niche player in the industrial computer leasing and parts market. Bill’s loyalty to and advocacy for his small cadre of employees were evident to me (as a fly on the wall) over the years, but when I connected with one of them to solicit added context for this telling, my impression was not just that those sentiments were reciprocated, but that I had had a conversation with someone akin to a surrogate daughter.

There again, my open-ended questions about Bill (singular) were answered with that 'team' theme: "Bill and Dot," each one offered with affection. The chat conveyed an unequivocal sense of loss, and a strong regret at having been denied the opportunity to visit her long-retired boss in person during the lockdown.

Bill was a lifelong hard-worker, forged to become that way I speculate not only in the crucible of the daily realities of a formative farm life, but perhaps as much by how different that world had been from the one to follow for him; the latter both more vast, and replete with frictions and challenges previously foreign to a country boy. His humility seemed constitutional to me, but perhaps it was also partly enforced by adaptations and imperatives demanded of him during WWII and after. In that vein, I think Bill relished the role of being a bit of a 'sleeper' of a success story in business, marriage, and life. If you wanted to know such things, you'd have to find them yourself.

Any pixels dabbed in painting someone complex are necessarily parochial choices; what motivates the strokes that surface for me in portraying my father and his life may no doubt vary from emphases that could come to mind for others who knew him across different contexts. Still, some color that makes it to my canvas for him may be ‘primary’, spanning the trivial to the profound: He had a quirky weakness for any thing flavored butterscotch or caramel, he was a conscientious father even amidst the busiest early career times, he was a profoundly proud grandfather, and again, he was an enduringly loyal husband and friend to my mother, Dot. The older he got, the more seemingly everyone he touched cherished his gentle nature, his integrity, and the generosity of the man I called "Dad". Maybe it had always been that way, and I just started paying closer attention.

He had a great run, and he'd be the first one to tell you that if he could.

Share Your Memory of
William
Upload Your Memory View All Memories
Be the first to upload a memory!
Share A Memory