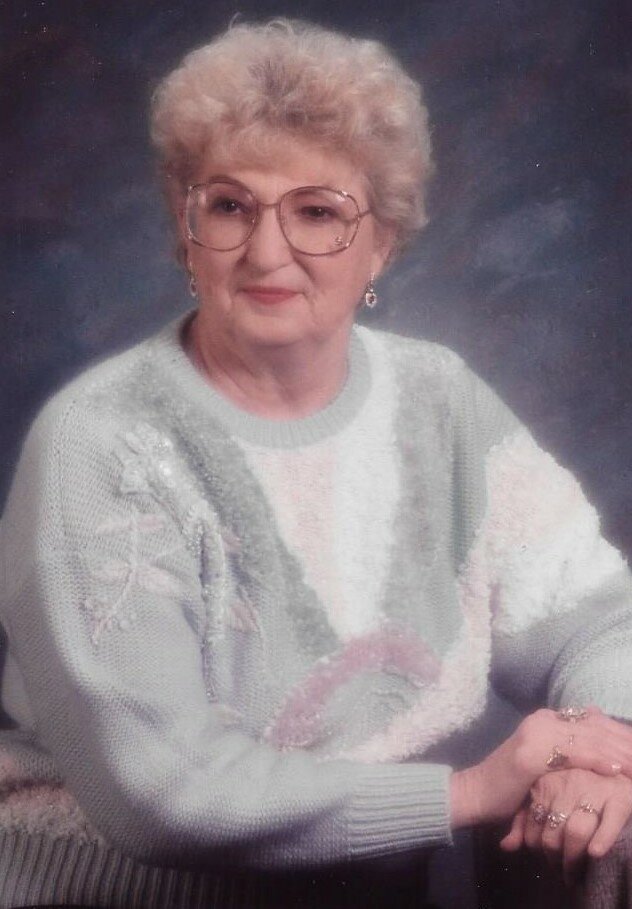 Joan B. Wilson, 90, of Mesa, Arizona passed away on Dec. 13, 2022, at Dobson Home (Hospice) in Chandler, AZ. Joan was born on March 31, 1932 in Independence, Mo. She was the eldest daughter of John R. (Bob) and Ruth (Chadwick) Pressly. She attended Fairmount School, next door to her home for the first seven grades of her education. Later, she attended High School in Eldorado Springs, Mo. Her father was a businessman ...working at a fish market, and then as owner of an egg company. She often spoke of her memories ... good times frolicking at the Kansas City Farmer’s Market area. Joan was involved in tap-dance from ages 2-7 and at age 9 began participating in youth rodeos doing trick-riding and roping. She played basketball and was involved in music groups while in high school. She took a few college classes at Kansas City College and Bible School in Overland Park, KS. It was there that she met and married Wayne Sumpter. To that union was born three children: Richard, Kit, and Sheryl. Wayne became a bi-vocational pastor and together they served congregations in at least 7 states/countries: Missouri, Mississippi, Wyoming, California, Oregon, Oklahoma, and the Cayman Islands. Joan often held jobs in addition to her numerous church responsibilities: cookie packer, waitress, dental assistant, home-school teacher, and later in life, bank accounts representative and mobile home pilot/escort driver. After her first marriage ended (1980), Joan married Robert D. Wilson (6/2/84). They took up residence in Mesa, AZ. where they lived until 2022, when both became ill and had to move to care facilities. Joan had a life-long love for music performance. She played the piano and sang in numerous churches, and at music jams. She had a lovely alto voice and claims that her musical talent came from being related to Elvis Presley. She loved travel and had visited at least 38 states, as well as several Caribbean Islands. In her later years, she battled Alzheimers but still loved to spend time with family and friends. Her bubbly personality showed through even as that disease compromised her health. She will be missed by the family and friends that she invested so much of her life in. Joan is preceded in death by her parents; 2 sisters: Nancy Lee Pressly, and Jean (Pressly/Fox) Roseman; and her son, Kit D. Sumpter. Left to mourn her passing: spouse, Robert D. Wilson; son, Richard Sumpter (Carol); daughter, Sheryl Szakin (Gene), brother, John Pressly (Virginia); step-daughter, Linda Steinbrenner; step-sons, Dale Wilson (JoAnna) and Wayne Wilson(Kim); grandchildren: Christopher Sumpter (Tiffany); Christina Cox (James); Matthew Sumpter (Sarah); Shane Sumpter; Luke Sumpter (Gabby); step-grandchildren: Charlie, Heather, Stacy, Kayla, Devyn, Matthew, and Dani; great-grandchildren: Courtney (Jayce), James, Elijah, Joel, Isabella, Logan, Violet, Brandon, Aliza, Faith, Caelyn, and Harper: step-great-grandchildren: Charli, Olivia, Cameron, Jayden, Diesel, and Remi and a host of nephews, nieces, cousins, etc. The family extends their thanks to Hospice of the Valley for Joan’s care during her final days. Funeral arrangements are being provided by Legacy Funeral Home (Rose Chapel), 1130 S. Horne, Mesa, AZ 85204: Visitation Dec. 29, 2022 @ 10:00 AM; Funeral service @ 11:00 AM; burial @ 1:30 PM at the National Memorial Cemetery, Phoenix, AZ. Dr. Tommy Foster, pastor of Harmony Community Baptist Church, will be officiating. Donations may be given in Joan’s honor to Hospice of the Valley. https://www.hov.org/donate or mail your donation to Hospice of the Valley, 1510 E. Flower St., Phoenix, AZ. 85014.

To send flowers to the family or plant a tree in memory of Joan Wilson, please visit Tribute Store

Share Your Memory of
Joan
Upload Your Memory View All Memories
Be the first to upload a memory!
Share A Memory
Send Flowers