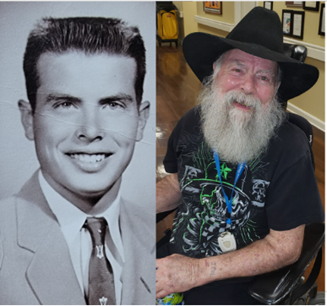 John Paul Hamilton, 83 years young, gained his wings and was reunited with his wife on Sunday, October 16th, 2022 in Chandler, Arizona.

John worked for many years as a Plumber and successfully ran his own plumbing business John Hamilton Plumbing. He loved deep sea fishing, dirt bikes & Nascar. If Nascar was on, most specifically “The Big Boys”, you would find him glued to the television. Most recently he was very active in Wii bowling. If you tried to call him during his bowling time, he would rush you off of the phone so that he could focus on his bowling game. John was the friendliest person and enjoyed sitting outside conversing with friends and family. He always had a smile on his face and was always laughing. He kept up on how all of his grandkids and great grandkids were doing and was genuinely interested in hearing about their activities.

Celebration of Life: Friday, November 11, 2022 12:30PM Invitation only. (Please reach out to one of his grandkids for more information) Simi Valley, CA.

To send flowers to the family or plant a tree in memory of John Hamilton, please visit Tribute Store

Share Your Memory of
John
Upload Your Memory View All Memories
Be the first to upload a memory!
Share A Memory
Send Flowers