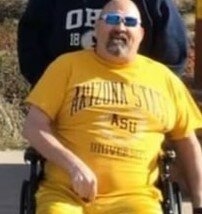 Nicholas Arthur Seagle, 43, passed away May 13, 2022, surrounded by loved ones.  He was born February 2,1979 in Dearborn, Michigan.  Nick and his sister Brandy were adopted by Rodney James Seagle and Sandra Lea Seagle March 7, 1988.
Nick was born with congenital heart issues and had corrective surgery at 18 months old.  At age 10 it became evident that another surgery was needed.  Problems occurred during the surgery leaving Nick handicapped.  He loved life and loved to make those around him laugh.  Nick touched everyone around him for good.
He is survived by his mother Sandy and sister Brandy.  He was preceded in death by his father Rodney and his brother Robert.

Share Your Memory of
Nicholas
Upload Your Memory View All Memories
Be the first to upload a memory!
Share A Memory